What’s Playing in Your Headphones? 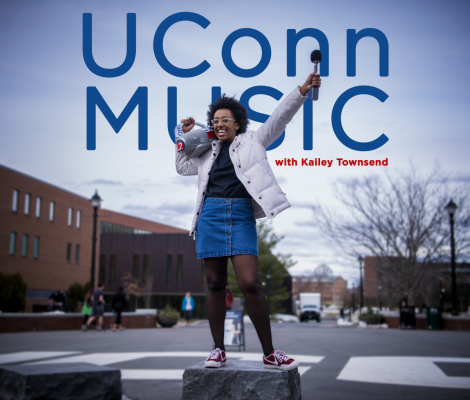 When one thinks of creating social media content for any large organization such as a top public university, one often thinks about the more typical social media platforms that are used: namely, Instagram, Facebook, Twitter, and Snapchat. While all of these platforms are important to use (they’re the most well-known for a reason!) it’s also interesting when an organization uses some additional platforms to create unique content. This is where our Spotify playlist campaign comes in. While Spotify is a platform that most individuals utilize in one way or another, it’s not always as typical to find institutions using it, so we decided to jump in and show a more creative, musical side of our community.

The Spotify campaign was first launched in October 2017 with the playlist entitled “Jonathan’s Jams,” named after our beloved Husky mascot Jonathan XIV and debuted on his fourth birthday. The playlist is a fun mix of songs, chosen by Jonathan himself, that were popular at the time, such as “Can’t Stop The Feeling!” by Justin Timberlake and “My House” by Flo Rida, as well as some dog-inspired tunes to honor Jonathan like “Who Let The Dogs Out” by Baha Men, “Bones” by The Killers, and “Howlin’ for You” by The Black Keys. 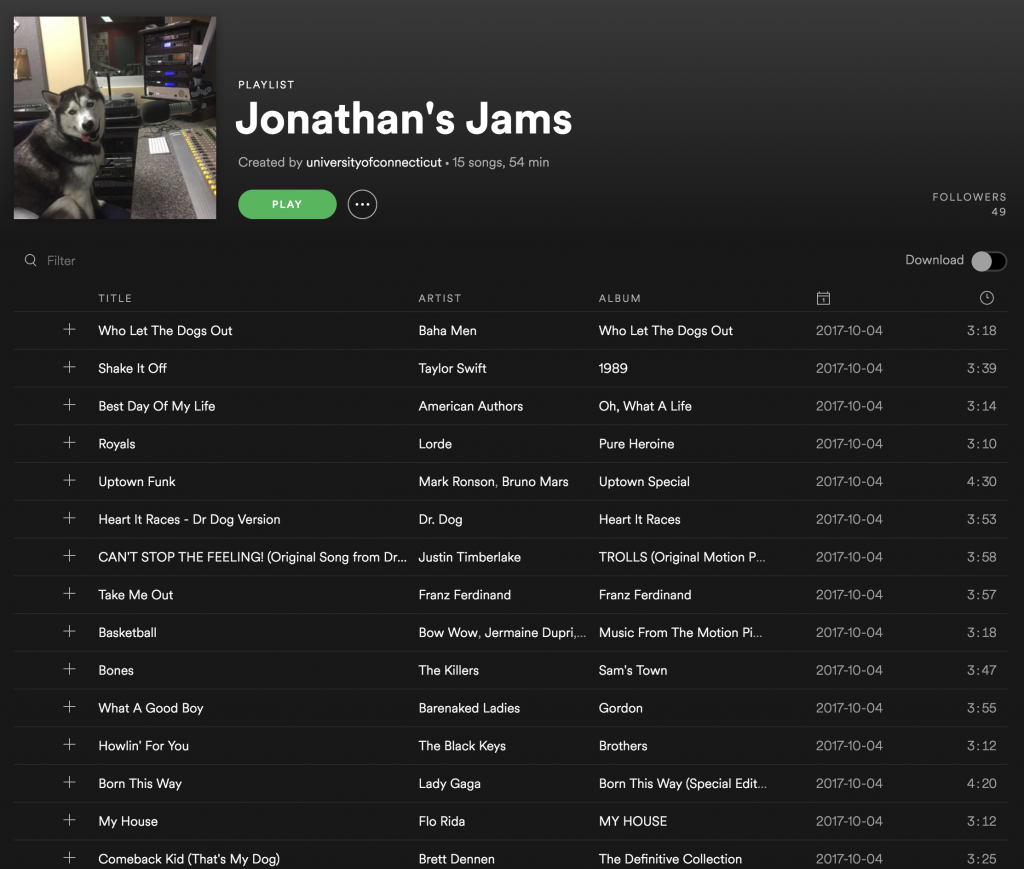 Our next playlist, published at the end of October, was our first professor takeover, which we partnered with a Snapchat Takeover to promote the playlist. Thomas Meade, a professor in the Communications Department, curated this playlist. Meade included a wide variety of classics, from “Get Down On It” by Kool & The Gang to “Born to Run” by Bruce Springsteen to “Say My Name” by Destiny’s Child. We hope for the professor takeover to be a recurring part of our Spotify campaign.

About a month later we published our “Finals Playlist” to get students through the stress of first semester finals. This playlist was mainly current and upbeat music, including tracks like “New Rules” by Dua Lipa, “Look What You Made Me Do” by Taylor Swift, and “Havana” by Camila Cabello. The last song on the playlist was “All I Want For Christmas is You” by Mariah Carey to remind students of what they had to look forward to after finals season.

In addition to professor takeovers, we’ve started implementing student takeovers as well. Our first one was for the “Commuter Vibes” playlist, which a commuter student here at UConn curated. This playlist is perfect for the commute to school, work, or anywhere in between, and was a great way to garner more commuter student representation. 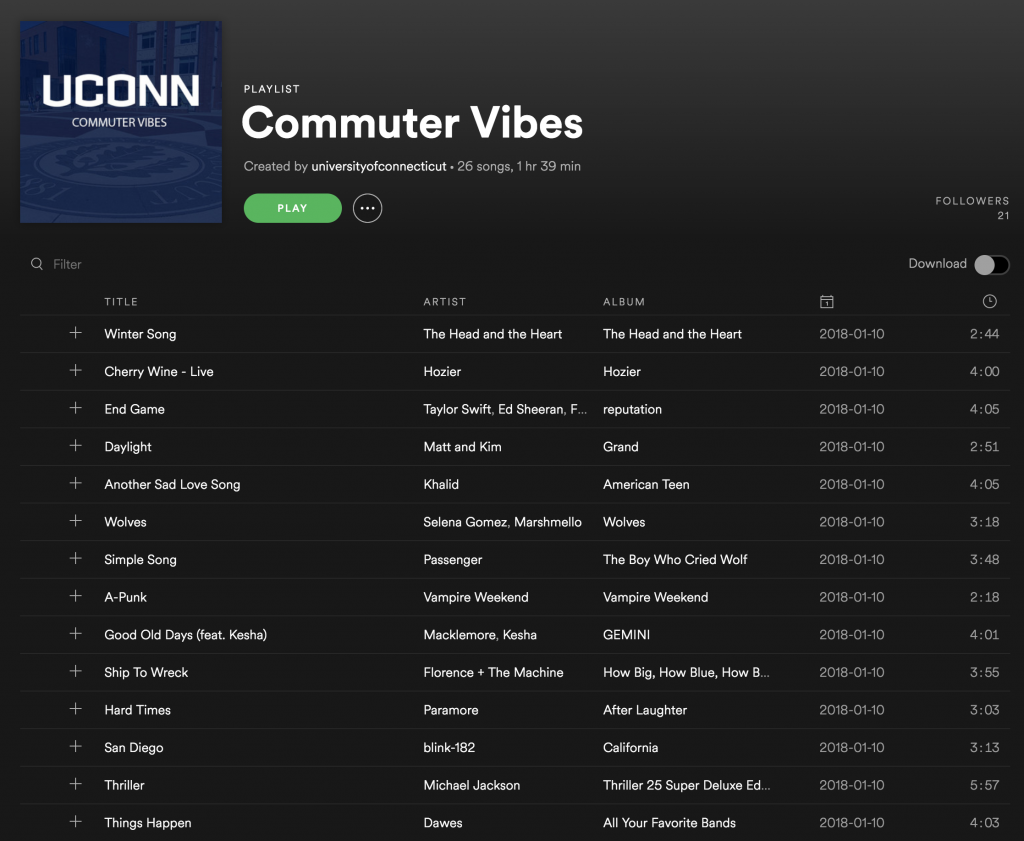 February saw a playlist flashback with “#FebruaryFlashbacks,” full of some of our favorite throwback jams such as “Every Breath You Take” by The Police, “Jessie’s Girl” by Rick Springfield, and “Uptown Girl” by Billy Joel.

Our most recent playlist, entitled “UConn Music,” goes along with a new video we dropped on our other social media platforms. Kailey, one of our other student social media content producers, went around campus and asked students what songs they were listening to. All of these tracks were then compiled into a our March Spotify playlist. With it being created for UConn students, by UConn students, it was a hit.

Up next? Our tribute to our graduating seniors!

Lucie Turkel is a junior pursuing an Individualized Major in Comparative Literary and Cultural Studies. In addition to working as a Social Media Content Producer, Lucie writes music journalism for the Life section of The Daily Campus and is the social media chair of Pi Beta Phi sorority. Lucie has worked as a social media marketing strategist for both Ali Fee PR in New York, NY and Peak Wellness in Greenwich, CT. She has also done a curatorial internship at the International Center of Photography Museum in New York, NY. She loves going to concerts and hanging out in New York City.

View all of Lucie's posts.